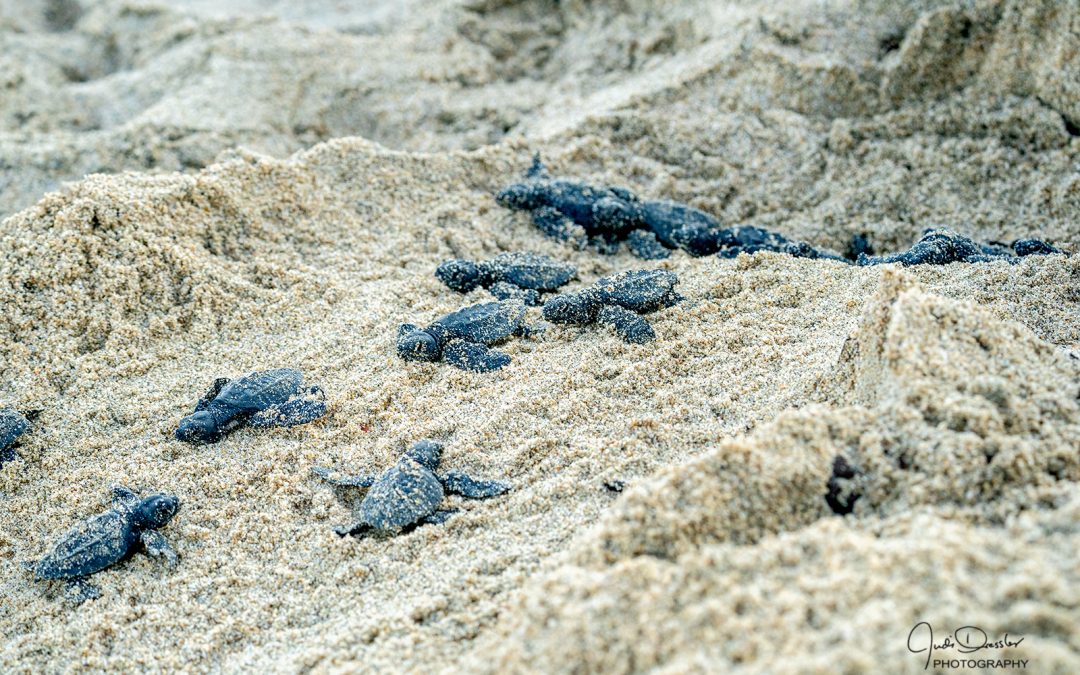 I had gotten the phone number for “Frank” from the local community center; he was the guy to call to help with the Olive Ridley turtles on the beach. While still in Colorado, Rob and I had hoped we might be able to witness and help with protecting the hatchling turtles as they make their way from nests on the beach to the water. Every year, adult turtles swim back to the shore where they were born, to build nests under the sand; the female despositing about 100 eggs at a time and then letting nature take its course. However, the hatchling turtles are vulnerable to all sorts of predation. Birds eat them, crabs will grab them, and humans will dig up nests and sell the turtle eggs here for about $1 per egg. Of those babies that make it to the water, most are gobbled up by fish. Plus, under the sand in the nest, the eggs fall prey to maggots. Altogether, we heard that only one out of over 1000 hatchlings will be able to return as an adult to lay more eggs, a sad statistic. Olive Ridleys are the smallest sea turtles; the babies being no more than two inches long, the parents apparently grow to around 18″ to 2′. 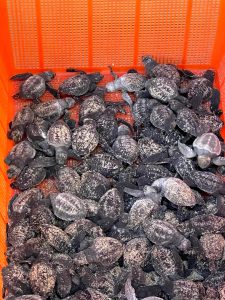 Last night we walked to Frank’s house, just down the block from Rob’s favorite sports bar. There was Frank in the yard, with three volunteers working at outdoor tables – Rick and Sue (a couple) and Zen; all older like us, and all English-speaking, a big help for us.  They were at work going through nesting boxes where the turtles had already hatched and had been removed. Frank keeps detailed records of each nesting box (how many lived, were sterile, etc), and the data is sent all over the world, so accurate reporting is important. We watched as Rick went through a box and showed us how it was done, and then we were required to watch again as Frank went through the same procedure. After that, Frank was stll not ready for us to start helping. Rob and I eyed each other silently. It didn’t seem like rocket science.

I wandered over to the house where plastic baskets containing hundreds of live little hatclings, several deep in each crate, lined the wall. Most of the little turtles were climbing over each other, reminding me of lobsters in a fish market, while some were asleep. Frank came over and I helped him tip the crates, so that those turtles that were lively could climb over the side and fall into into empty crates. That separated out the turtles that would be ready for the beach tonight from those who needed more time. The turtles need to be strong and their lungs ready to walk to the water and swim out to the ocean, so those half asleep would wait another day.

Finally I was allowed to sort through a nesting box with Rob keeping track of the stats. The hardest part, for me, was that when shells were broken into pieces, how to know how many eggs they comprised(?), but when we were done, the number I found amazingly added up to the number of eggs that had been placed in the box – success!

And then — when it was almost dark, it was finally time to release the hatchling turtles on the beach!! Zen had left, Sue and Rick drove a

dune buggy, and Rob and I joined Frank in his ancient, muffler-less, falling-apart Honda CRV (“the best car made, and only Mexican factories know how to make them right”), with buckets of sand in the back to be returned to the beach, plus baskets of turtle babies. Going over a big bump in the rough road I heard a sound and saw one of the baskets tip over – uh-oh! We rode on, through a little alleyway onto the sand, past big logs and branches deposited by Hurricane Roslyn. After we got out, we discovered baby turtles crawling all over the back of the car and grabbed handfuls of them to put back into the basket, a few were behind buckets and in the side pocket. Finally, after dumping the sand, Frank took the basket out about 30 feet from the surf and tipped it onto the sand. Immediately, some of the babies headed towards the surf! I watched the leader of the pack, stopping occasionally but never veering from her path. Slowly, slowly, she got closer to the wet sand, and then, a wave washed over, and… she was gone!! Close behind were 3 more. Back at the dump site, a few turtles seemed to wander off in slightly the wrong way, but Frank assured me that they would all be in the water in a half hour.

We heard that sometimes you can find turtle nests on the beach, so the next morning, we decided to look for them on the northern stretch of beach, and sure enough we found one!! SO exciting! Over and over, we witnessed baby turtles making their way to the water, and then if the wave was big enough to pull them out, they were gone!
And now we could get photographs! The ones in this post are all from that nest. You can click on any of the images to see a larger one – and usually it will be in better focus. 🙂 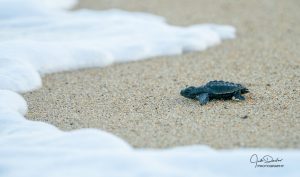 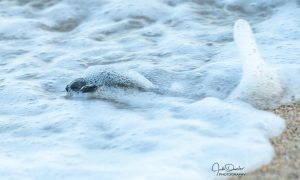