Driving down to Mexico 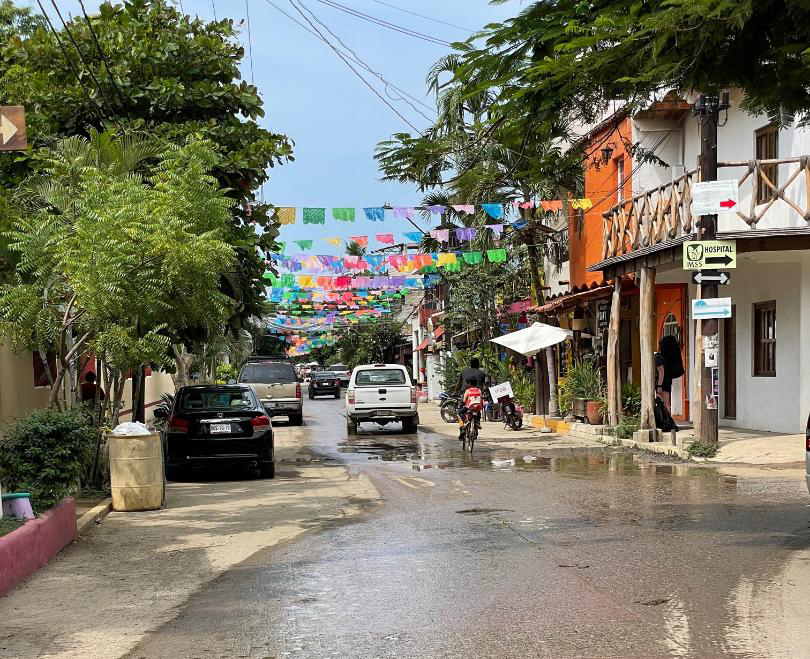 The Trip – Leaving Colorado on October 10

After packing the car full of everything we thought we needed, including a cargo box full of clothes on top of the car and a bike rack in back with both our mountain bikes, we were off! We had a John Grisham audio book to keep us entertained and enough Mexican pesos for any contingency.

The drive down generally went well in the US; we stopped at a couple pre-determined places in the US (Bosque, NM and Sonoita, AZ, a tiny town not far from the border), visited with Rob’s brother and his wife in their home with a backyard full of hummingbird feeders, and then headed south to Nogales on the border with Mexico. We were expecting to be stopped at the border to have our passports stamped, to get a permit for the car, to buy Mexican car insurance, etc., but we only got stopped for a 1-minute questioning by the military about our intended trip, they stuck their heads in the window for a look around, and that was it. But where was the immigration office? We asked one of the border guys, but got a reply in Spanish of something like, “it’s further down the road”, and were waved on. We drove along the main busy street, suddenly already so different than a US city street, with so many tiny shops and signs in Spanish everywhere for tacos and everything under the sun. We couldn’t find immigration anywhere, so as we drove on, Rob called Customs and Immigration and spoke wth an American, who said that they had moved the immigration office and since we were headed to the city of Guaymas that night, we could get it done on the way out of Guaymas. Now Guaymas is around 250 miles south of Nogales, so we were very puzzled. Really?? But that’s what he said, and since we just couldn’t find the immigration place anywhere in Nogales, we settled back for the drive, enjoyed the very green, hilly countryside and the colorful small towns, and five hours later found our hotel in Guaymas and checked in.

After a delicious late lunch at the big hotel, we headed out looking for immigration, but it wasn’t clear where to go, so I went into a small customs office that we found. Everyone seemed confused by my limited Spanish request asking where to get our passports stamped, etc., but after an hour, someone came down the stairs with two addresses, one for getting our passports stamped and the other for the car permit. Yay! We headed to the passport office first, but all we found was a Burger King. Hmmm… looking around, there was nothing even remotely resembling a government building; just stores and gas stations. Okay… let’s leave that for now and try the permit office. By now it was starting to get dark. We had read various Internet articles saying that it’s safer not to drive after dark in Mexico, but we had a long drive ahead of us the next day, so needed to get it done. So off we went! On the dark road was some problem with a train at an intersection; military guys everywhere, and we were forced into a slow bumper-to-bumper detour. After a lot of stop and go traffic, we finally made it back onto the road and followed Siri’s directions to the permit office. But again there was nothing there; just a stretch of highway. Hmmm… two bogus addresses. As we slowly negotiated the same detour back, Rob called Customs and Immigration again. This time, a different guy told us that there is no immigration office in Guaymas, and we needed to return to Nogales right away because we were driving illegally in Mexico and could have our car confiscated and be arrested if we were stopped. Yikes!!! It was quiet in the car we we slowly absorbed the news that we would need to spend the entire next day driving 5 hours back to Nogales, spend an hour or more at immigration, and then drive 5 hours back. That night we Googled “immigration in Nogales” and found the place, and the next day, we did find it with Siri’s help. No big signs, no arrows, nothing. Just a washed out set of small signs by the side of the road mentioning insurance and maybe something referring in Spanish to immigration, but we surely didn’t recognize any of the words. Ironically, we had stopped *right* after that set of signs the day before, at a small taco place, for lunch. Luckily, it didn’t take long to get through all the various immigration steps. At one of the various counters, we had been asked where we were going, and when we replied “San Francisco in Nayarit”, an American woman near us exclaimed, “You’re going to San Pancho? That’s where I’m going, and I love it there!” – and right away we felt a little excited and a little connected.  An hour or so later, after each of us was relieved of a few hundred $ of our money, we were able to drive, legally finally(!), back to Guyamas! But first we stopped at the same taco place, and the waitress smilingly asked us whether we wanted the same as yesterday. Yes, I did, those tacos were so good!

After finally making it back to Guaymas, we spent a 2nd night in the same hotel, and the next morning put the bikes back on the rack and rolled out heading towards Culiacan, a city close to half-way to San Pancho. 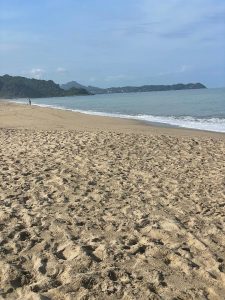 Mexico roads definitely have some distinctive features. The toll road, or Autopista, isn’t cheap and isn’t always great, with some sections of slow 2-lane roads and small towns to slowly negotiate, but many sections are divided highway with fast traffic. Of note are the speed bumps in every town or section of highway where there’s a gas station and an “Oxxo” store. There are no signs saying the bumps are coming up, but after a while you learn to expect them. Some are rounded, but many are short, high bumps; either way if you aren’t going slowly, you will regret it! That will make everything inside your car, including you, jump up into the air! I missed one that shook the bikes crazily, broke a clamp on the bike rack, and had us worrying somewhat for the rest of the trip. Often people selling goods are standing at the bumps, hoping to sell flowers and all types of food in plastic bags (none of which we could recognize in time to decide yay or nay and not wanting to look too closely to get their hopes up), and sometimes a young guy would jump in front and clean our windshield, whether we wanted him to or not and whether it needed it or not, even if we frantically gestured “no” repeatedly, and of course we felt obligated to give him some money.

One time, as we rolled into some speed bumps, a guy stopped us, and when I rolled down my window, he told me to pull over. I asked why, and his reply was that they were checking for guns, drugs, and money and he motioned for me to get over. We saw a couple of other cars stopped with a bunch of guys around them, but then we noticed that none of these supposedly official people, not even the one who stopped us, was wearing a uniform. Was this one of those heists we’d heard about, where they take your money and valuables? Rob said, “just keep going”, so I sped away. To our relief, no-one followed us.

Our hotel in Culiacan was my favorite of the trip. A beautiful quiet getaway in the middle of the city with small casitas and green, lush grounds, a swimming pool, and a lovely room. I think it cost around $80; in the US it would have been easily $200. After breakfast in the dining room the next morning attended by starched wait staff — the breakfast was delicious except that no-one here seems to know how to cook eggs unless they’re scrambled on in an omelette, where “fried eggs” gives you two overcooked rubbery eggs — we were back on the road and were finally headed to San Pancho that night! We finished our John Grisham book just in time.

When we arrived in the afternoon at our new place of residence for the next 6 months, the owner of the property, Sergio, was there to greet us in his small overgrown front yard. He lives downstairs and we live upstairs by way of a narrow, rusty outdoor spiral staircase. He’s Italian, with that Italian energy, and we were greeted lovingly by his tiny dog, “Dolce”.